How to Write Dystopian Fiction (Part 2): Lois Lowry's The Giver and Gathering Blue 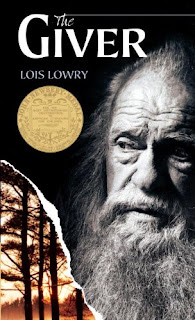 How to Write Dystopian Fiction is a ten-part series written by Silverthought Press editor Mark R. Brand during a two-month independent study with Miles Harvey, Assistant Professor of English, DePaul University. The series attempts to analyze what works in a variety of new and old speculative fiction texts with utopias and dystopias as central themes, and to offer advice to writers about how to use these narrative strategies most effectively. This is part two.


One review on the back of the dust jacket of The Giver describes the book as “tightly-plotted”. I’d call it instead “tightly-trope-ed.” The Giver doesn’t surrender to plot tropes as much as it revels in them, but it’s clear that Lowry’s book doesn’t hold up on the strength of its characters. Instead, it jumps from one long-established trope to another, like so:

Once upon a time we’re in a creepily calm dystopia where everyone’s afraid of breaking rules that are very different than our own, and something happens that gets our attention because it breaks those very rules. And then something happens where the rigid black-and-white thinking prevalent in our dystopian community is challenged by a necessarily gray-area concept or plot development. Then the protagonist, observes this gray areaand starts to feel anxious about all of these rules despite having lived under them his whole life (groan). He thendiscovers that there’s something (gasp!) different about him! Then the quasi-superhuman protagonist (who is of course also necessarily vulnerable to the crushing, unfair and now increasingly obvious dystopian regime) is sent to learn more about himself from a wise old sage. The wise old sage was once just like the protagonist, but some past failure has broken his spirit, and he must be made whole by the confession of this secret. A betrayal happens from a character we least expect, the protagonist decides to take drastic action and a spirited flight/chase/fight-for-survival ensues. The end.

​Lowry’s construction, the tropes I mentioned above and their interplay, was all quite obvious on the page, but it nevertheless managed to be a highly enjoyable and gripping read. It tapped a bit into the simplistic manipulation of the rules of reality and paired that with considered (if somewhat thinly-sketched) characters. I remember more or less the same feeling from other simple but engaging books like Ayn Rand’s Anthem, Jacqualine Harpman’s I Who Have Never Known Men and Susan Collins’ The Hunger Games. By “simple”, I mean that the casts of these novels are small, intimate, and they inhabit only a small part of the greater world in which they exist. In that way, they are perhaps more like novellas or short stories than novels.
​The smallness of them is carefully calculated, I think, and necessary. Who, after all, could read the description of a newborn being given a lethal injection in its forehead and not be utterly horrified? Lowry pulls no punches here with her language, and so much so that I expect there may even be an undertone of anti-abortion political agenda at play in this book. But consider that this horror only works because the borders of the community in The Giver are finite. The population of the community numbers in the low thousands at most (only fifty new births per year for population replacement), and so the death of a child becomes a thing of outsized, isolated horror the way it would be if this were the child of a post-apocalyptic story in a community trying desperately to repopulate a dying species. In a healthy, fully-realized fictive world, such behavior would be barbaric, but here it seems somehow worse; more deeplyevil, perhaps, which is where I got the impression that Lowry might be trying to say something more concrete about her own personal politics.
​A number of small flaws dogged the book (as they do any book, even good ones) such as the emphasis put on Elsewhere. Elsewhere becomes a sort of standard Shangri-La/Promised Land construct in the minds of the characters, but it lacks definition or description on the page, and indeed the borders of these utopian communities are also ill-described. The effect is one that shrewder novels such as Margaret Atwood’s Oryx and Crake avoid: the concept of Elsewhere exists solely for its profluence and not for any other reason. In The Giver this oversight doesn’t fatally damage the reader’s suspension of disbelief, but it does erode the vividness and give the impression that Lowry was unselfconsciously aiming for a timeless, enduring Big Meaningful Point book.
​Other flaws include the lack of potent authority figures in the community (which is a clever but plausibility-damaging workaround of an overly-flogged trope) and the minimalizing of technology in the story. Authority and technology are at the heart of every utopian/dystopian idea, and when they are ignored or glossed-over, that choice somewhat colors the entire story. 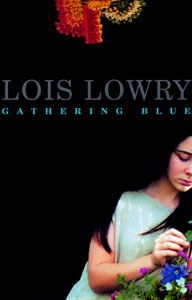 ​After reading The Giver, I went ahead and read the sequel as well, 2000’s Gathering Blue. Many of the same strengths and flaws were present in both books: the story’s characters were tightly tied to the action on the page with digressions and background kept to a minimum. The main character was literally (instead of symbolically) orphaned within the first ten pages, and like Jonas from The Giver, Gathering Blue’s Kira seems very emotionally isolated from anything like a traditional family structure. Kira’s mother Katrina doesn’t betray her in quite the same way that Jonas’s father does, but it’s clear that Lowry’s dystopian vision for the future depends on characters who are emotionally disconnected from their immediate social circles, and especially their families.
​ And herein lies a flaw I’m not willing to overlook: Jonas is becoming a man, but Lowry dances frustratingly around this fact instead of tackling it head-on. She mentions an erotic dream that he has early in the story, then goes into some detail about the pills he must take to quell his emerging sexuality. He is put into close proximity with a female member of the community whom he likes, and then he is given access to thousands of forbidden books full of every conceivable sort of knowledge. Like Adam in the garden of Eden, he finally takes ownership of the knowledge of good and evil and (instead of ingesting an apple) he stops ingesting the “stirrings” pills.
​Where does Lowry take all of this? Nowhere. Instead, Gabriel (another aspect of the story that exists purely for plot profluence and not because his presence has self-propelled importance) is threatened and Jonas decides to flee the community, his family, his newfound job of utmost importance, AND his new symbolic father, the Giver. This is an exciting development, and one which, again, is tightly trope-ed, but it makes little sense from a narrative perspective.
​Is this really the best Lowry could do to tackle the subject of sexuality? Jonas running away from everything with a baby? All plausibility aside, the message she is sending to her reader with this plot choice is completely disjointed. The equation that the plot satisfies contains no co-efficient of sexuality. It’s like sayingX+Y+Z=maturity/fatherhood where X equals a newfound skill (echoes of adolescence) and Y equals burgeoning sexuality. Where’s Z, Lowry? Where’s the catalyst? It just isn’t there in The Giver.

What have we learned:
Embrace simpler wording when world-building if possible. Don’t isolate protagonists from their families unless absolutely necessary. “Special” character traits like the ability to disregard mundane limits like customs, laws, chores, and habits with impunity are more exciting and compelling than true superhuman abilities. Take care to avoid repeating the same narrative patterns (and therefore flaws) from story to story.
Posted by Mark R. Brand at 11:57 AM